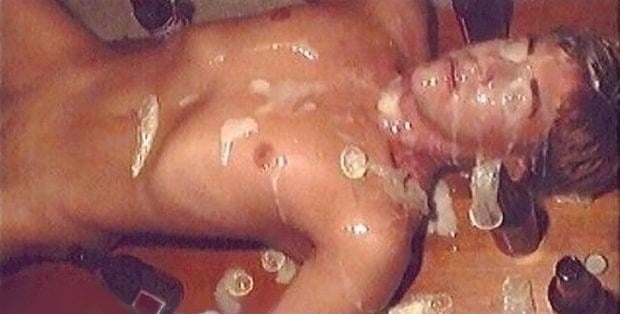 This is a real life experience of mine and a true story (yes, that is me in the photo). Late in my teens and desperate for money, I decided to become an adult video chathost (webcam model). That business is extremely competitive and most of the people doing it have no shame to begin with. It’s very difficult to stand out in a field in which the bar is constantly rising. Having won several performer awards catering to men with a semen fetish, the site I was working for offered to organize a live bukkake show for my so-called “fans”. Hesitant and uneasy about having sex with dozens of men I had never met before, I initially said no thank you. When I was guaranteed a rather generous retainer fee plus the opportunity to gain hundreds of new fanclub members, I caved and said yes.Bukkake is definitely not for the squeamish and not much different than an organized gang-****. To allow it to be broadcast live online to the public was extremely risky, not to mention really stupid on my part. Fortunately I was already heavily jaded by that age having been exposed to so much smut and assholes convincing me this stuff was normal. What would be considered horrific to most people only seemed like a necessary requirement for my line of work.

At a privately-owned restaurant in Tampa Bay, I arrived more nervous than I had ever been in my entire life. On the way there I took a dramamine and a shot of whiskey when I arrived. I did my best not to look at any of the men in the eye, in fear I might be swayed to chicken out. Two reps from the webcam site I worked for directed and did their best to keep things in order. The men arriving were provided condoms “for their protection”, a little OTC blue pill, and enough beer to keep the men’s restroom perpetually filled to capacity. To keep a long story short, I will say that bukkake scenes are not nearly as hot as they seem when watching it online. Trying to keep order and some kind of direction with that many horny men is like trying to herd cats. Not only do they not listen and follow orders well, some men do not shower before hand, shave down there, or aim properly. Of the 50+ men that attended, only 30 or so were capable of actually ejaculating on my face. The rest either fired early on themselves, missed me completely, went limp from nervousness, or were too quick on the trigger. I’d be lying if during this very twisted marathon that I didn’t ask myself “how the hell did I get here?” and “where did I go wrong in life?” several times.

It took nearly two hours for everyone to finish, and at one moment I seriously doubted if I’d be able to walk afterwards. As I laid there naked in a pool of semen for what seemed like eternity, an overpowering sense of shame flowed through me. My eyes were nearly goo’d shut but I could still hear the voices and see the bright flashes of the camera through my eyelids. I wondered what my friends and family would think if they were to see this. What if anyone I knew from school was watching? Would I be able to get a “real” job if it ended up on-line permanently? Would anyone still want to be with me knowing I’ve already been with so many men? The ride home with my best friend was quiet and awkward. We both knew I had made a huge mistake and two grand was hardly worth it. It was extremely humiliating and to this day I still struggle with my life choices and have to convince myself it was “part of the territory”. Definitely one of my life’s low points but looking back it does get my juices flowing. It was a stepping stone in a career where there are no limits, just massive pitfalls. I just happen to be addicted to those pitfalls…